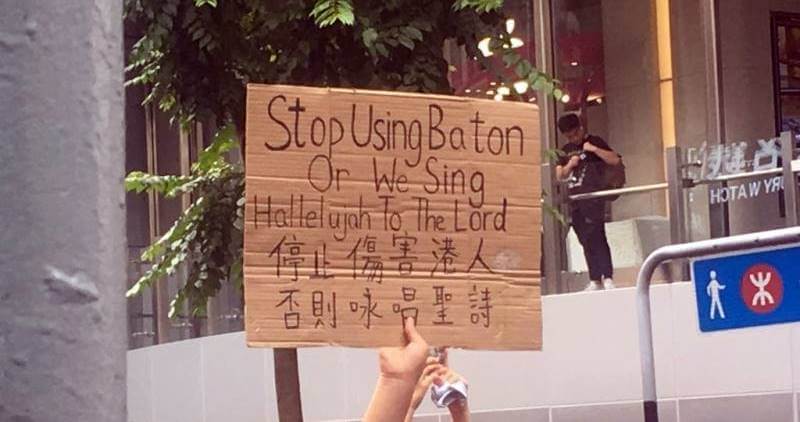 Jesus teaches us to love our neighbors. How can Christians claim to love their neighbors without engaging politics, the arena that most profoundly shapes basic rights and freedoms? Ephesians 5:11 instructs us to say no to dark forces and to reprove them. No true Christian will remain neutral between Christ and Anti-Christ (governments), God and Satan, Jehovah and the Red Dragon (Red China). It is political neutrality that enables dictators like Chairman Mao, Stalin and Hitler to come to power. Jesus himself never remained neutral. Jesus said that he had come to bring not peace but a sword to the world (Matt. 10:34). At times in the Bible, God either personally or through His prophets, encouraged his chosen people to go against their enemies. No doubt, Paul asks Christians to be submissive to the “governing authorities” (Romans 13:1), yet by “governing authorities”, he means ONLY those that reward the good and punish the evil (Romans 13:4). (North Point Alliance Church Hong Kong Senior Pastor Gordon Siu and Jevohah’s Witnesses advocate political neutrality.)

Jesus teaches us to love our neighbors as ourselves (Matthew 22:39), to let our light shine before people, and to glorify our lord in heaven (Matthew 5:16). Politics in Latin (politicus) and in Greek (politikos) means “of, for, or relating to citizens”. Politics, which involves making decisions that apply to citizens, is one of the most crucial domains in which Christians demonstrate love to neighbor. Indeed, how can Christians claim to care about others and not engage the arena that most profoundly shapes basic rights and freedoms? Taking care of the hungry, thirsty, naked, sick and lonely is significant to Jesus and should be to His followers, too (cf. Closson 2015). Jesus said, “As you did it to one of the least of these you did it to me” (Matthew 25:40).

“If you are neutral in situations of injustice, you have chosen the side of the oppressor” — Desmond Tutu.

Ephesians 5:11 instructs us to say no to dark forces and to reprove them. In Micah 6:8, God requires us to do justice, to love kindness, to release prisoners of war and to set free those oppressed by tyrannies. It is political neutrality that enables dictators like Chairman Mao, Stalin and Hitler to come to power. The hottest part of Hell is reserved for those who remain neutral when faced with an important moral crisis, according to Dante, the author of Inferno.

No true Christian will remain neutral between Christ and Anti-Christ (governments), Jehovah and the Great Red Dragon (Red China), God and Satan.

Jesus said that he had come to bring not peace but a sword to the world (Matthew 10:34); indeed, to sow discord between fathers and sons, mother and daughters, mother-in-laws and daughter-in-laws (Matthew 10:35). At the end of the day, Jesus Christ was politically framed up to death by the teachers of the law and the Pharisees, exactly because He debunked their hypocrisy and threatened their authorities.

God encourages us to go against our enemies

At times in the Bible, God either personally or through His prophets, encouraged his chosen people to go against their enemies. “Moses spake unto the people, saying, Arm some of yourselves unto the war, and let them go against the Midianites, and avenge the Lord of Midian” (Numbers 31:3 KJV). “Fear not, nor be dismayed; tomorrow go out against them: for the Lord will be with you” (2 Chronicles 20:17 KJV). “The copy of the writing for a commandment to be given in every province was published unto all people, and that the Jews should be ready against that day to avenge themselves on their enemies” (Esther 8:13 KJV). “If a thief be found breaking up, and be smitten that he die, there shall no blood be shed for him” (Exodus 22:2 KJV).

Jehovah’s Witnesses claims that they advocate political neutrality following Jesus’ example of refusing to take up any official position. However, as pointed by David Closson (2015), the Bible speaks about civil government and provides examples of faithful engagement. In the Old Testament, Joseph and Daniel served in civil government, exerting influence to advance the flourishing of their nations. In the New Testament, Jesus engaged in holistic ministry, caring for the spiritual and physical needs of people. Feeding the hungry and healing diseases were an outworking and extension of the reconciliatory message of the gospel. Paul also advocates this approach: “As we have opportunity, let us do good to everyone” (Galatians 6:10). And: “For we are his workmanship, created in Christ Jesus for good works, which God prepared beforehand, that we should walk in them” (Ephesians 2:10).

Bible as a record of Jewish People’s Political Struggles

From a historian’s perspective, the Bible is a record of the Jewish people’s political struggles. For instance, Moses’ leading the Israelites out of Egypt’s colonial rule, as documented in Exodus, was none other than an independence movement of the Jews.

Also, in the Book of Esther, the heroine foils Chief Advisor Haman’s plot to kill all the Jews in the Kingdom of the Achaemenid dynasty of Persia by persuading King Ahasuerus with her beauty and love to do otherwise, i.e., to kill the enemies of the Jews. If Esther had tried to remain neutral when she had learned about a conspiracy to destroy the Jewish people, what would have happened? Silence or neutrality was not an option and Christians need to take sides on all issues (cf. Charl van Wyk 2012).

In addition, with a honey trap, the daring and beautiful widow Judith decapitated the Assyrian General Holofernes, who invaded Jerusalem, and saved her Jewish countrymen.

Pro-CCP North Point Alliance Church Hong Kong Senior Pastor Rev. Gordon SIU Sau-wah (D. Min., Fuller Theological Seminary, California), in his 2019-12-1 sermon, ordered pastors and instructors of his church to remain “politically neutral” and not to use phrases like “5 demands” & “HK Add Oil”. Jehovah’s Witnesses also requires their believers to respect and co-operate with the government, citing Romans 13:1:- “Let every soul be subject unto the higher powers.” Similarly, in his 2019-9-15 sermon, Pro-CCP HK Evangel Seminary Director Joseph LU preached, “To Go against the Govt is to Go against God!”

Paul Never told us to be subject to ALL authorities

No doubt, Paul asks Christians to “be subject unto the higher powers” (Romans 13:1 KJV), yet by “higher powers”, he does not mean any authorities, but only “the minister of God, a revenger to execute wrath upon him that doeth evil.” (Romans 13:4 KJV). Peter also advises similarly:- “Submit yourselves to…governors…that are sent by him for the punishment of evildoers, and for the praise of them that do well” (1 Peter 2: 13-14 KJV).

Admittedly, Jesus tells us to give back to Caesar what belongs to Caesar and to God what belongs to God (Luke 20:25), which is often quoted to support the divorce between Christianity and politics. But to Jesus, ultimately, everything, including Caesar’s things, belongs to God (cf. Liu Tsui-yuk, Adjunct Assistant Professor, Divinity School of Chung Chi College, 2013)). The context of this saying of Jesus’ is that the chief priests and the scribes, who were jealous of Jesus, sent forth spies trying to trap him with the tricky question as to whether the Jews should submit tax to Caesar, in order that they might take hold of his words, that so they might deliver him unto the power and authority of the governor. Jesus saw through their craftiness and came up with a politically clever answer.

Political neutrality is kowtowing to Satan

In a word, political neutrality is highly suggestive of unChristian cowardice and kowtowing to Satan.